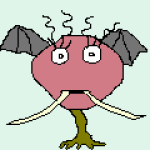 A Yahoo boy in Lagos State whose named is not mentioned, has ran mad due to the lockdown that has been placed in the country, to contain the spread of Covid19.

According to the source

The young man came out of his car and started screaming, the next thing he picked up a rod and started hitting and destroying his car.

His friends tried to calm him down but he only became worse, people took pictures and videos of him.

When his friends were asked what happened, they replied saying

“He has to perform a ritual in Edo State, before the end of the month of May, but he couldn’t travel to Edo State, because of the ban that has been placed on travelling.”

His friends who were also into the ritual said

“We have been pleading with the babalawo to change the terms of the ritual for at least two months, because of the lockdown but he refused. We are to bring 7 used ladies pant to the babalawo who is in Edo state, but we have not been able to do that because, of the lockdown and today is the last day of the month and the deadline, we are confessing because we don’t want the same thing to happen to us.”

I was a victim of internet fraudsters (Yahoo Yahoo boys) – Asa

A Lady Was Used For Ritual By Yahoo Boys

Yahoo Caught Trying to use mother for Money Ritual