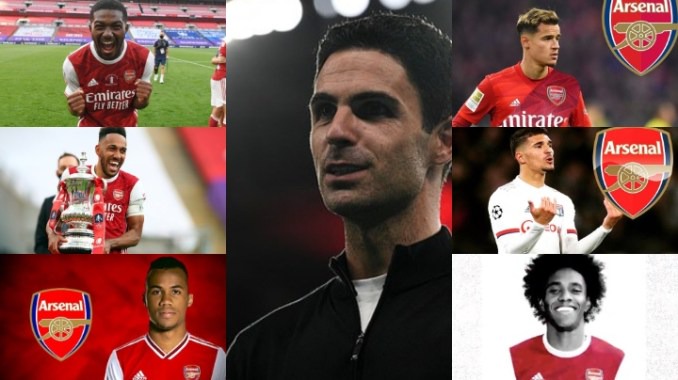 Arsenal news and gossip is coming in thick and fast and Sportarena is on hand to bring you all the very latest from Emirates stadium.

Houssem Aouar bid made to Lyon

Arsenal have offered midfielder Matteo Guendouzi as part of their bid to land Lyon playmaker Houssem Aouar this summer, according to reports.

The 22-year-old midfielder has been heavily linked with host top clubs across the Europe this summer, including Juventus and Manchester City, having helped the Ligue 1 side to reach the Champions League semi-finals this term.

Aouar put in stellar performances in Lyon’s epic run to the last-four but could do little to stop Bundesliga side Bayern Munich on Wednesday night, who ran out 3-0 winners in Lisbon.

But according to French outlets L’Equipe, claims Aouar, 22, has caught the eye of Arsenal this summer, with the Gunners prepared to offer French midfielder Matteo Guendouzi in negotiations.

It adds that the north London side are the only club to have made an approach for Aouar so far, despite interest from Manchester City and Juventus.

But Lyon are holding out for £54million for their highly-rated midfielder, who scored nine goals and contributed ten assists in all competitions for Ligue1 side last season,

Arsenal will need to raise their cash part of the offer if they want to get their man for Mikel Arteta this summer.

Lille defender Gabriel Magalhaes has reportedly set to put pen to paper on a contract with the Gunners, despite interest from Manchester United.

The 22-year-old has been monitoring by top clubs across the Europe with including Manchester United, PSG and Napoli.

But Mikel Arteta’s side appeared have won the race for the Brazilian centre-back after agreeing a €30million deal, despite Manchester United make a last minutes attempt to hijack the transfer.

According to The Times, claims Gabriel Magalhaes has completed his Arsenal medical after agrees five-year deal with north London club.

Barcelona outcast Philippe Coutinho has responded to a question on his future amid links with Premier League side Arsenal.

The 28-year-old playmaker is on loan at Bayern Munich as the Bavarian chase the Uefa Champions League trophy.

But the Bundesliga champions don’t plan an trying to sign the midfielder permanently despite scored eleven goals and contributed nine assists in all competitions.

Meanwhile, Barcelona are considering selling the Brazilian star after struggled at Camp Nou since arrived from Liverpool in January 2018 with £142million.

And when asked about what’s next ahead of the 2020/21 campaign, Philippe Coutinho has revealed that is yet to make final decision about his future, only focusing on Champions League final against PSG.

‘My mind is fully focused on the competition,’he said. ‘It’s a unique opportunity for us. I’m very happy to be in the Champions League final.

‘On my future, I haven’t thought about it because I’m only thinking about the final.’

Wolverhampton in for Maitland-Niles

Sky Sports report that Wolverhampton Wanderers are the latest team to make their interest known, with the midfielder – who has also played wing-back – rated at around £20million by the Gunners.

Newcastle United are also thought to be keen, but Spurs’ reported interest is not deemed realistic.

Arsenal new signing Willian has urged skipper Pierre-Emerick Aubameyang to commit his future to the club admitting: ‘It is very important to me’.

The Brazilian winger joined the Emirates on a free transfer from Chelsea last week and is already looking forward to linking up with the Gabon forward, who scored 29 goals in all competitions in another pivotal season for the Gunners.

He helped the team lift the FA Cup- against Willian and the Blues – and the Brazilian winger says someone of Aubameyang’s quality will be crucial in reaping further success and he must be tied down.

‘I joined Arsenal because we can challenge for titles but Pierre will be a big part of the plan,’ he told the Sun.

‘This is a guy who gets 25-30 goals a season and we have to keep a player like that.

‘He’s one of the best players in our team and somebody I want to be making chances for.’

Meanwhile, Sportarena understands Aubameyang has verbally agreed a deal to sign a new three-year deal worth upwards of £250,000 per-week, with club officials now putting the finishing touches on the deal.